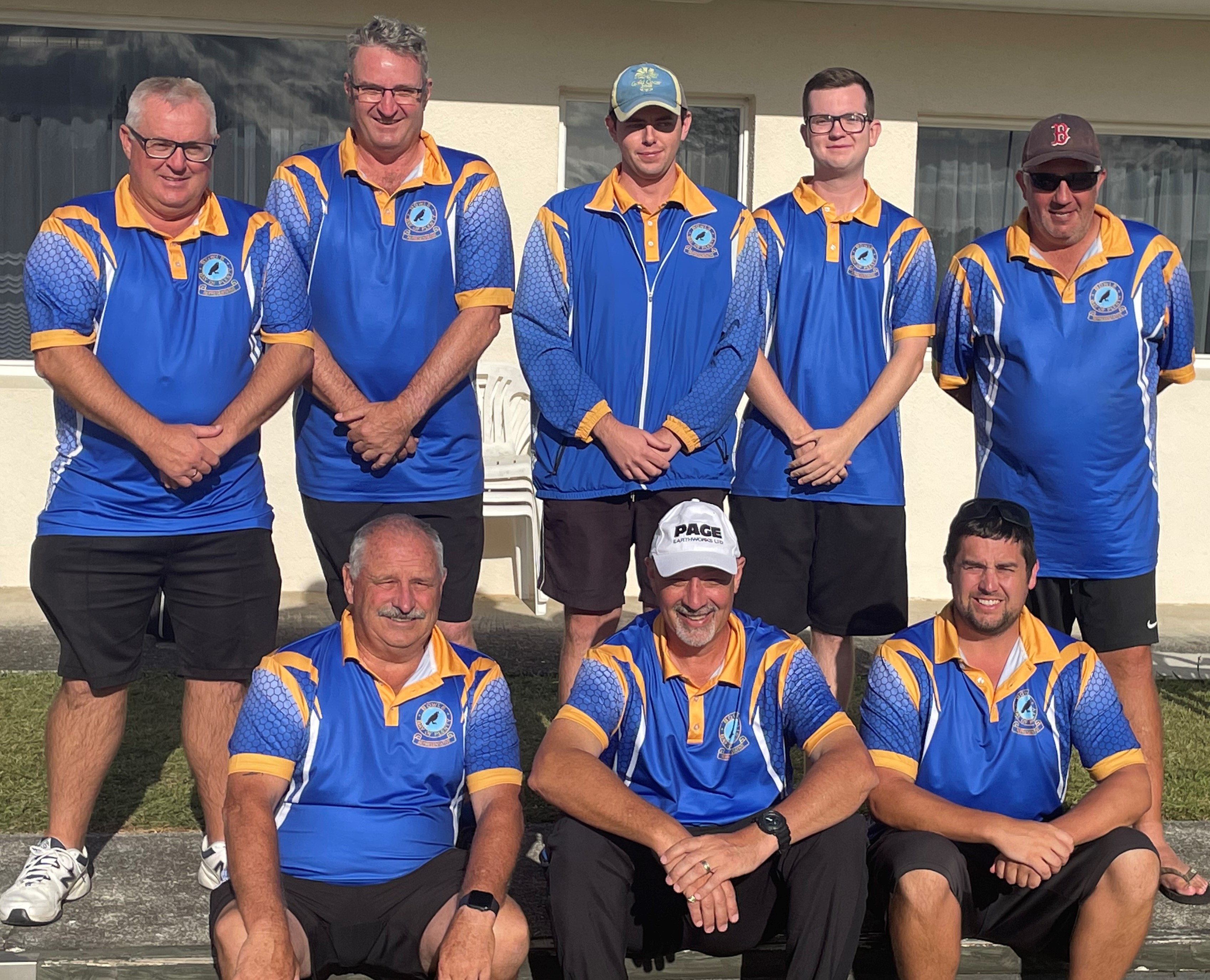 The Bay of Plenty men’s team capped off a successful season by winning the Zone 2 inter-centre play-off at Tui Park, Te Aroha on March 19 in a tense encounter.

The Bay now meets Auckland (Zone 1 winner), Wellington (Zone 4), Marlborough (Zone 5) and defending champion Southland (Zone 6) in the national final in October. The Zone 3 play-off between Manawatu, Wairarapa and Gisborne-East Coast is being played in mid-May.

But the four of Nic Tomsett, John Gray, Lance Tasker and Cliff Webber steadied the ship, as they did all day, by beating Waikato 17-13.

The Bay got back on track with a 3-0 victory over nearest challenger Thames Valley. O’Shea beat Gerrard Slattery 25-22; Dickison and Arlidge won their pairs 16-11; and the four was again in front at 16-12.

Things got interesting again when O’Shea lost his third round singles match to Counties-Manukau’s Frankie Lim 17-25. But the pair, playing their best game, beat experienced David Clark and Roger Andrew 20-13, and the powerful four ran away with a 23-7 victory.

Bay selector/coach Gayle Melrose said the guys played well and after losing the first round they came back with a vengeance. The women just had an unfair result.

The Bay women felt robbed after they won the most individual games – six out of nine matches - but only finished second to Thames Valley.

However, the Bay lost their match with Thames Valley 1-2. Mary Campbell, replacing Sue Hodges in the singles, was beaten 11-25 by Lindsay Nicholls, and the four of Debbie White, Mina Paul, Mere Eden and Raewyn Willis lost 9-13.

The steady and experienced pairing of Wendy Green and Lynette McIntosh, who were unbeaten over three rounds, edged ahead of the Thames Valley combination 18-17.

In the first round the Bay women were in full control overpowering Waikato 3-0 with Campbell beating New Zealand Para representative Lynda Bennett 25-11 in the singles, Green and McIntosh winning 28-10; and the four grabbing a 15-11 victory.

The Bay also gained the match points against Counties-Manukau 2-1 with Campbell beating Alison Rennie 25-12; the pair winning 22-14; and the four just losing 11-13. But by then it didn’t matter, as it turned out, after a strong debate about the scoring system.

There were upsets and near upsets in the other regional play-offs. In Zone 5, the star-studded Nelson men with national squad members Shannon McIlroy and Lance Pascoe, national singles champion Kelvin Scott, former international Richard Collett and James Pugh lost to Marlborough 3-0 and didn’t have to play anymore.

There were only three teams in the play-off and Marlborough went on to beat West Coast 2-1.

It nearly happened to the Auckland men, with internationals Gary Lawson, Michael Galloway, Tony Grantham and Jamie Hill, in the three-team Zone one contest.

North Harbour beat Northland 2-1 in the first round and was on the brink of beating Auckland until the final crucial ends of the singles between Grantham and Bart Robertson who lead 24-22. At the time the North Harbour four was ahead of Auckland with Lawson, Hill, Aiden Takarua and Nick Thompson.

In the incredibly difficult and windy conditions on a fast Mangawhai green, the determined Grantham picked up three late singles to win 25-24. And the Harbour four ended up drawing 15-all. Auckland then beat Northland 3-0.

Hopefully, Bowls New Zealand will soon get back to the full inter-centre championships, to save any heartache, with all centres competing at the same time over four days. This event is one of the highlights of the season for the competitive representative players.