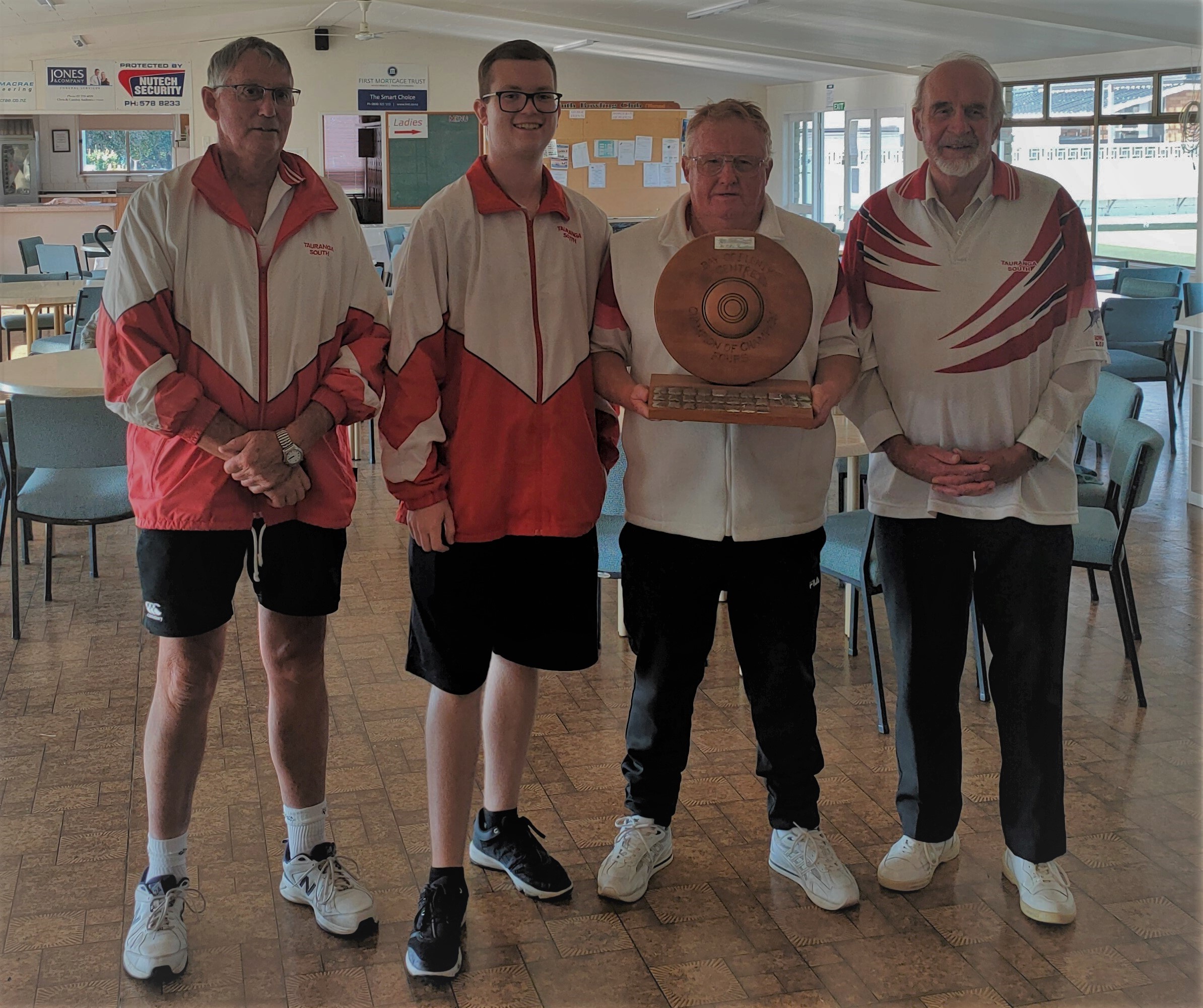 It was party time at the Tauranga South Club when their men’s and women’s sides achieved a unique feat by winning the Bay of Plenty champion of champions fours on their home green on the same day.

The two Tauranga South fours now compete in the national final in Hastings on July 22-24.

Ouellet, Pattillo and Duncan, the defending champions, bounced back quickly from the disappointment of losing the champ of champs triples the week before on an extra end to Arawa’s Scott Ivimey, Johan van Gruenen and Terry Connolly.

The Tauranga South four were in commanding form. They beat Ngongotaha’s Reg Sim 19-3 in the quarter-finals and then Taupo’s Steve Lee, Jim Fitzsimons, Rick Whittaker and Grahame Velvin 18-14 in the semi-finals.

Meanwhile, it was a big day for Tomsett’s team-mates Tom Redfern, Rod Warrender and Pat Drury who beat Papamoa’s Gary Bodger in the quarters 17-16 and overcame Katikati’s Robin Pierce, Alan Burwell, Neville Canute and Kevin Mahon 14-12 in the semis.

But the Mount quartet didn’t have enough firepower in the final to combat the all-round strength of the Tauranga South team which has featured strongly in centre events lately.

The Gilbert-skipped Tauranga South women’s team paved the way to glory with an upset 17-10 victory over experienced Jan McLeay (Arawa) in the quarter-finals.

The Mahon quartet upset Bay representatives Marilyn Constantine (Tauranga) 19-10 in the quarters and Mount’s Raewyn Willis 16-11 in the semis. Willis had won the champ of champs triples the week before.

The force was with Ivimey, van Gruenen and Connolly in the final of the champ of champs triples. On the extra end, Duncan drew shot a foot away and van Gruenen played the backhand, slid off a Tauranga South bowl and slipped right in behind the jack.

Ouellet was unable to dislodge the ‘offending’ bowl and the Arawa triple gained a meritorious 14-13 victory. They earlier beat Omokoroa’s Bill Murphy 21-6 in the quarters and Ohope’s John Hornell, Rick Morris and Brian Davies 14-12 in the semis.

Willis linked up with Meredith Pottage and long-time lead Mary Conroy to dominate the women’s champ of champs triples. They beat Ohope’s Margaret O’Regan 21-12 in the quarters and Te Puke’s Adrienne Reid, Lynda Copeland and Judy Cooper 16-9 in the semis.

Hodges had beaten Whakatane’s Shirley Watson 18-5 in the quarters and Taupo’s Annie Judge, Janice Collier and Ushla Croft 22-10 in the semis.

Ivimey and Willis qualified for the national champ of champs triples final at the Naenae indoor centre on July 15-17.

There was also plenty to celebrate at Ngongotaha after the all-club final in the Bay open fours women’s championships. Mina Paul won her 29th centre title to stretch her record as the Bay’s most successful bowler, hotly pursued by Wendy Green, and Julie Kerry won her first centre title.

Green’s side stormed to the front after picking up a six on the fourth end and extended their lead to 14-5 after nine. They then collected five shots on the 11th to lead 19-8 and 20-11 after 13 ends.

Barnard and her crew staged a fight-back with two singles and a four to trail 20-16, and Eden put the kitty in the ditch on the last end. But bowls from Green and McIntosh restricted Barnard to just one shot and the 20-17 victory.