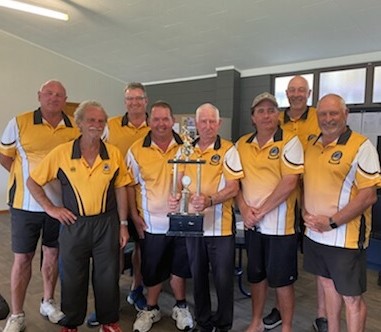 The Tauranga men’s side won in dramatic fashion, and the experienced Ngongotaha women defended their title in the Baywide Sevens Inter-club finals at the Te Puke Club on December 5.

The favoured Tauranga and Mount Maunganui teams played alongside each other in qualifying and the final, matching and eyeing each other game for game. And then it came down to the last bowl of the fascinating contest delivered by an opposing player – John Gray, national fours titleholder and President of the Te Puke Club.

The Mount four of Kevin Maxfield, Phil Morgan, Alan Jones and leftie John Simons led 11-9 against Te Puke going into the last end of the deciding third round match.

The Mount had two early close bowls hanging off the jack, and the Te Puke skip Gray stepped onto the mat in the tense and quiet moment, with fellow players and a good smattering of spectators wondering what would happen next.

Cooly and calmly – well, on the outside anyway – Gray played a lightly weighted forehand and shuffled the jack back to his team’s two bowls. Maxfield drew just short with his last bowl, and then Gray delivered the cutting blow, drawing for a third shot.

Te Puke won the fours 12-11, the Mount – a draw was all they needed - suffered their third loss of the finals, and an ecstatic Tauranga scraped through by one game point, after having six wins and a draw.

The Tauranga men’s four of Steve Hughes, Graham Skellern, Ben Thurston and Cliff Webber were unbeaten throughout the four days of play, as was the Mount pair of Nick Tomsett and Nathan Arlidge, though the four had two draws against Tauranga South in qualifying and Te Puke in the final.

National squad member Dan Dickison applied the pressure by winning his three singles in the final, 21-10 over Greg West (Te Puke), 21-19 against Steve Beel (Mount) and 21-14 over Lance Hoete (Kawerau). But again it was last bowl dramatics, this time from Dickison, that finally gave him the edge over Beel.

The Tauranga pair of John O’Shea and Lance Tasker, multiple centre title-holders, didn’t quite have their best tournament. They beat Te Puke 23-15 but lost to the in-form Tomsett and Arlidge for the second time 12-17 and then in the crucial third round fell to Kawerau’s Marcus Merrick 10-14.

In another crucial game, the Tauranga four led by four shots into the final end against Mount and held on 15-14 – with the Mount picking up three shots. Beel had 21-12 and 21-11 victories over Kawerau and Te Puke, and Tomsett/Arlidge won their matches against the same teams 22-11 and 17-13.

THE NGONGOTAHA women completed a cleansweep in the third round to get the better of a plucky Papamoa who had recorded four wins in the first two rounds and was one game point ahead of Ngongotaha.

Ngongotaha, who have been there and done it before, stepped on the gas.

MEANWHILE, the Bay of Plenty premier one sides kicked off their representative programme in fine style with convincing wins against Thames Valley at Te Aroha’s Tui Park Club.

The men had six wins from the nine games and the women five wins and a draw to register 34 match points against Thames Valley’s 19.

The premier two sides found strong resistance, with the men recording three wins out of nine games and the women going one better with four wins. But Thames Valley came 33 match points to the Bay’s 21.

The Bay women recorded four wins a draw but it wasn’t quite enough to head the Valley with six wins and a draw. Thames Valley finished with 39 match points to Bay’s 24.

The next encounter is on January 15 when the Bay premier teams step out against North Harbour at the Katikati Club.