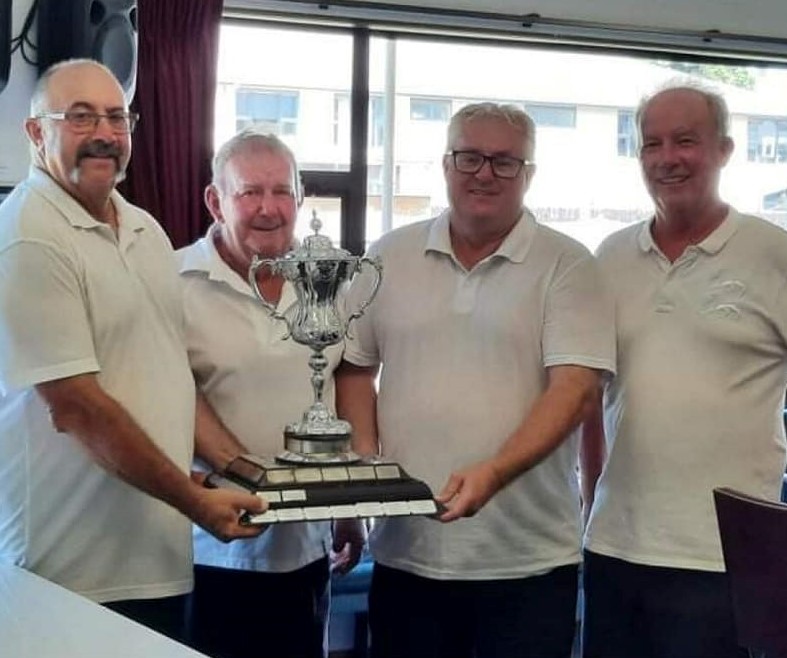 When David Jones, John Gray, Steve Beel and Merv Gibbons lost their first round qualifying, it was their fourth successive loss in the tournament including last season. They wondered whether their fortune would turn.

The experienced quartet won their next six games and collected the Bay of Plenty men’s fours championship, beating the Kevin Maxfield-skipped Hinuera combination in a thrilling final at Te Puke on Auckland Anniversary Day.

After winning their final two qualifying games, they settled into a combo and breezed past the Cliff Webber-skipped team 19-2 in the first round of post-section.

They then beat centre president Bill Murphy’s Omokoroa side 16-10 in the quarter-finals, and Te Puke’s Brian Wightman, Jarrod Riley, Matt Mortensen and Greg West 21-7 in the semi-finals.

The final against another composite side of Kevin Maxfield (Mount) and Hinuerá’s Stu and Bruce Settle and Paul Casey jnr was a tense affair. The score was tied up at 11-all with two ends to play.

Jones and his crew picked up three crucial shots to lead 14-all on the final end. Maxfield held two counters and with his last bowl frustratingly drew through a small gap without touching anything that would have given him three shots. Jones, Gray, Beel and Gibbons prevailed 14-13.

Gray and Beel added the centre fours to the national title they won in Alexandra last season. And Beel has now won six Bay of Plenty fours championship, usually as skip. "I'm trying to own that one," Beel said. "John and I played down the team and have a hit out in the positions we were playing in the nationals. But of course they have been cancelled."

For Maxfield it was his second successive runner-up in the blue ribbon fours championship, after losing to Hinuera the season before. “I decided to join them this time but it didn’t quite work out,” said Maxfield.

The Maxfield combination had tight tussles through the post-section play. They fought back after dropping a seven to beat the dangerous team of Dan Dickison, Nick Tomsett, Anthony Ouellet and Nathan Arlidge 17-16 on an extra end in the quarter-final, and then edged out the Te Puke side of Graeme Ricketts, Doug Russell, Tony Gabolinsky and Greg West 17-15 in the semi-finals.

The Bay women’s open fours is down to the last two with two Ngongotaha teams - Wendy Green, Lynnette McIntosh, Julie Kerry and Mina Paul, and Mere Eden, Janet Barnard, Vini Smith and Janine Potroz – meeting in the final on a day to be organised.

The Green-skipped four was too strong for Angela Stephen’s composite side in the quarter-finals, winning 16-4, and then overcame another Hinuera/Tauranga team of Debbie White, Carolyn Tasker, Marilyn Constantine and Mary Campbell 13-10.

Eden’s team upset Bay representative Raewyn Willis 13-10 in the quarter-finals and then overpowered the Katikati side of Janet Alexander, Joy Scott, Hien Mack and Helen Board18-7.