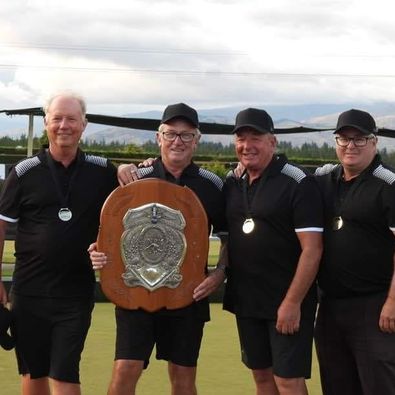 Long time between drinks at Alexandra for the "old boys"

The longevity of a playing career was never better illustrated than the success of Mount Maunganui’s Steve Beel and his skip Maurice Symes in the New Zealand men’s fours at Central Otago.

Likewise, it was a long time between drinks for Blenheim greenkeeper and former international Symes who waited 36 years after winning the pairs with Geoff Hawken, both out of Hawera, in Auckland in 1985.

Kernaghan, this time playing with Lance Pascoe, Shannon McIlroy and Kelvin Scott, has lost the last three fours finals by one point.

The Symes combination led 16-9 when Kernaghan’s classy team fought their way back into the game and went ahead by one playing the final fateful end.

Supermarket owner Gray, winning his first national title, brought home the bacon by drawing a toucher and Symes put in a back bowl. With his final drive, Kernaghan hit the target and the kitty and toucher went into the ditch to give Symes two shots and victory.

“The toucher was on a 30-degree angle to the kitty and I have no idea how they got into the ditch. I was just thinking `Mike has hit it and goodness knows where it will finish’,” said Beel.

Symes and his crew took out the defending champions Gary Lawson, Jamie Hill, Caleb Hope and Sheldon Bagrie-Howley 17-12 in the quarter-finals, and then stopped the unbeaten run of Brian Little, Ian Monaghan, Brett O’Riley and Bevan Smith in the semi-finals, winning 24-13.

They fell to the eventual multiple winners Mandy and Angela Boyd, Kirsten Edwards and Lee Griffin 17-13 in the semi-finals after leading10-2. Earlier, Witton and her team beat Pam Walker 17-15, and Christine King 29-7 in the quarter-finals.