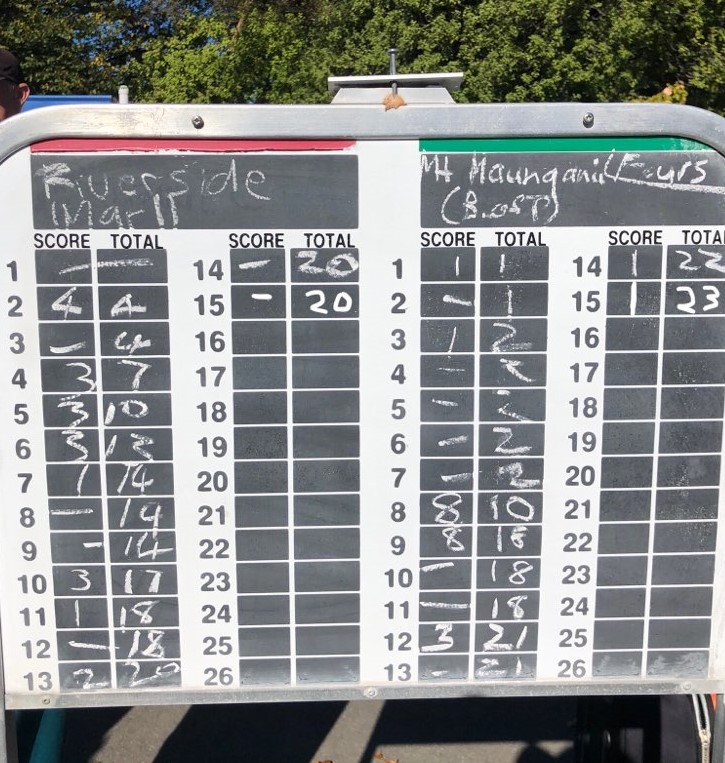 The scoreboard says it all: Two eights in a row for the Mount men's fours team
go back

The Mount Maunganui men’s fours team recorded a remarkable feat during the national interclub sevens championship in Christchurch – something that may have never been achieved in bowls. They scored maximum eight shots on successive ends.

Really, it’s harder than getting a hole-in-one in golf. Eight bowls and there’s no opposing ones in sight.

The rare action took place in the third qualifying round at the Fendalton club. The Mount four of John Gray, Paul Anderson, John Simon and John Simon – yes, there are two John Simons, one plays right-handed and the other left-handed, to add incredulity to the story.

Riverside from Marlborough is leading 14-2 after seven of the 15 ends. The club is seemingly in an unassailable position, but wait.

On the eighth end, the Mount side has stacked their bowls just behind the kitty. Gray, who won the national fours title this season in Alexandra, trailled the kitty a metre and a bit with his last bowl and picked up the first eight.

It’s 14-10 to Riverside. On the ninth end, the Mount is holding four shots and the Riverside skip knocks up another Mount short bowl. He then elected to run and reduce the count, but alas took out their only bowl on the head, the fifth shot, and dropped another eight. Score: Mount 18, Riverside14. Mount went on to win 23-20.

Mount manager Kevin Maxfield, a two-time national fours champion, said “I don’t know if this has been done before, especially at this level. You might have seen it at club or gala stuff.

“I couldn’t believe it. Everyone in the game was taking pictures of the scoreboard. The other games still carried on and it wasn’t till afterwards that people started to buzz and appreciate what had happened.”

Maxfield, who has been playing 40 years, said the closest he had seen a similar situation was in the John Flett junior qualifying contest in Hastings in 1987. He was representing Bay of Plenty against Gisborne, Hawke’s Bay and Waikato, and thought they had finished second.

In the final fours match of the day, the Waikato fours dropped an eight and a seven over the final two ends to lose, after the skip missed his drives. The Bay team went on and won the national final at Henderson.

The Mount men qualified for the quarter-finals in Christchurch after winning their section, but were beaten by Browns By two matches to one. Steve Beel lost his singles 21-13 to Colin Rogan; Nick Tomsett and Nathan Arlidge beat Jean Viljoen and Dave McMurchy 22-8; and the Mount four went down 14-10 to the unbeaten combination of Neil Fisher, John Walker, Lindsay Gilmore and Brian Wilson.

During the qualifying Beel won three of his six matches; the Tomsett/Arlidge pair five of their six matches; and the four recorded four wins. The Mount finished on 36 games ponts, ahead of Takaro (Palmerston North) and Gore.

The Ngongotaha women also put up a strong performance, losing to Carlton Cornwall in the quarter-finals. Charlene Beckett fell to Linda Ralph 21-5 in the singles; the ever consistent pairing of Wendy Green and Lynette McIntosh beat Karen Hema and Lisa Prideaux 16-14; and the four of Mere Eden, PK Tamehana, Lillie McGregor and Mina Paul lost to the Carlton Cornwall combination 16-10.

Ngongotaha finished second on a countback in their section, with Beckett having three wins out of six; Green/McIntosh four victories; and the four five wins from six matches. Ngongotaha accumulated 36 game points and plus 76 on differential, just behind Queenstown on 36 and 125.