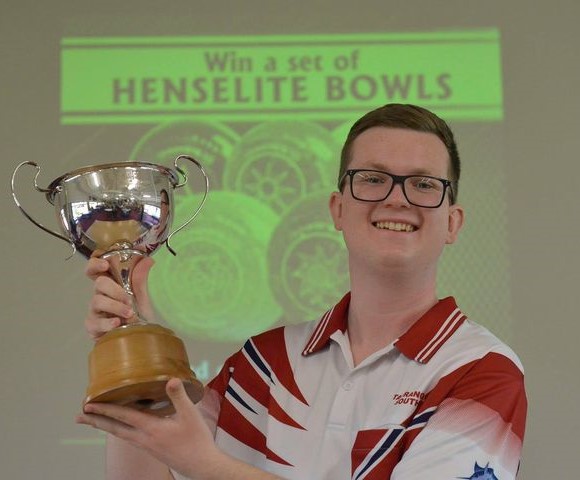 In the winning circle: Anthony Ouellet is all smiles after warding off the best of the country's under 26 players.
go back

Tauranga South’s talented 20-year-old Anthony Ouellet stamped his mark as one of the country’s most promising players after winning the prestigious Burnside Under 26 singles.

“It was awesome,” said Ouellet. “I was delighted to reach the semi-finals again and then to go onto the final and win that was so much bigger. I’ve still got five years left for this tournament and maybe I can get the title a couple more times.

“Seeing all the young ones and being part of that group is just as good on its own.”

Covid restrictions allowing, Ouellet practised as much as he could at his club to prepare for the big event down south in early October. “Janice Paap gave me some drills to do, which were good, and I went to the club days when they were on.”

Ouellet, who made his inter-centre debut for Bay of Plenty last season, waltzed through the qualifying and finished his section on top with six wins and plus 58 points. On his way through, he beat national singles champion and last year’s Burnside winner Taylor Horn 21-15 and Wellington representative Bradley Down 21-17.

His only loss of the tournament was at the hands of Taranaki’s Hamish Kape 16-21 in the section play.

Ouellet struck Down again in the quarter-finals, this time winning 21-18, and he then upset national squad member and 2018 Burnside winner Seamus Curtin (Wellington) 21-15 in the semi-finals.

After picking up a four on the first end, Ouellet fell behind 4-10 and clawed his way back to12-all against Curtin. Then the tables turned. Ouellet collected two fours to lead 20-12.

“Seamus hit a patch where he couldn’t find the green or his weight. It was unexpected. I ended up dropping a three but then got the single I needed,” Ouellet said.

In the final against Hocking, the Canterbury champion of champions singles winner last season, Ouellet jumped out to 5-0, 8-5 and 12-8 leads, but mid-way through the match was12-all.

Hocking edged ahead16-15 with two singles and a two, and the enthralling final was again locked at 17-all. Hocking picked up a single, but in a sensational finish Ouellet drew all his bowls close to pick up a winning four.

“It was a cut-throat game, back and forth,” said Ouellet. “I played short lengths and he pulled the mat back and it came down to who nailed the jack first. It was mostly a drawing game.”

Ouellet is now settling into the centre and club events but is looking ahead to the national singles and pairs championships back in Christchurch in early January. He’s playing the pairs with Papamoa’s Terry Leadbetter.

“I’m staying on to play the Burnside Pairs with Adam Baillie; we ended up finishing fifth last season. The greens there must love me or it could be the other way round,” said Ouellet.