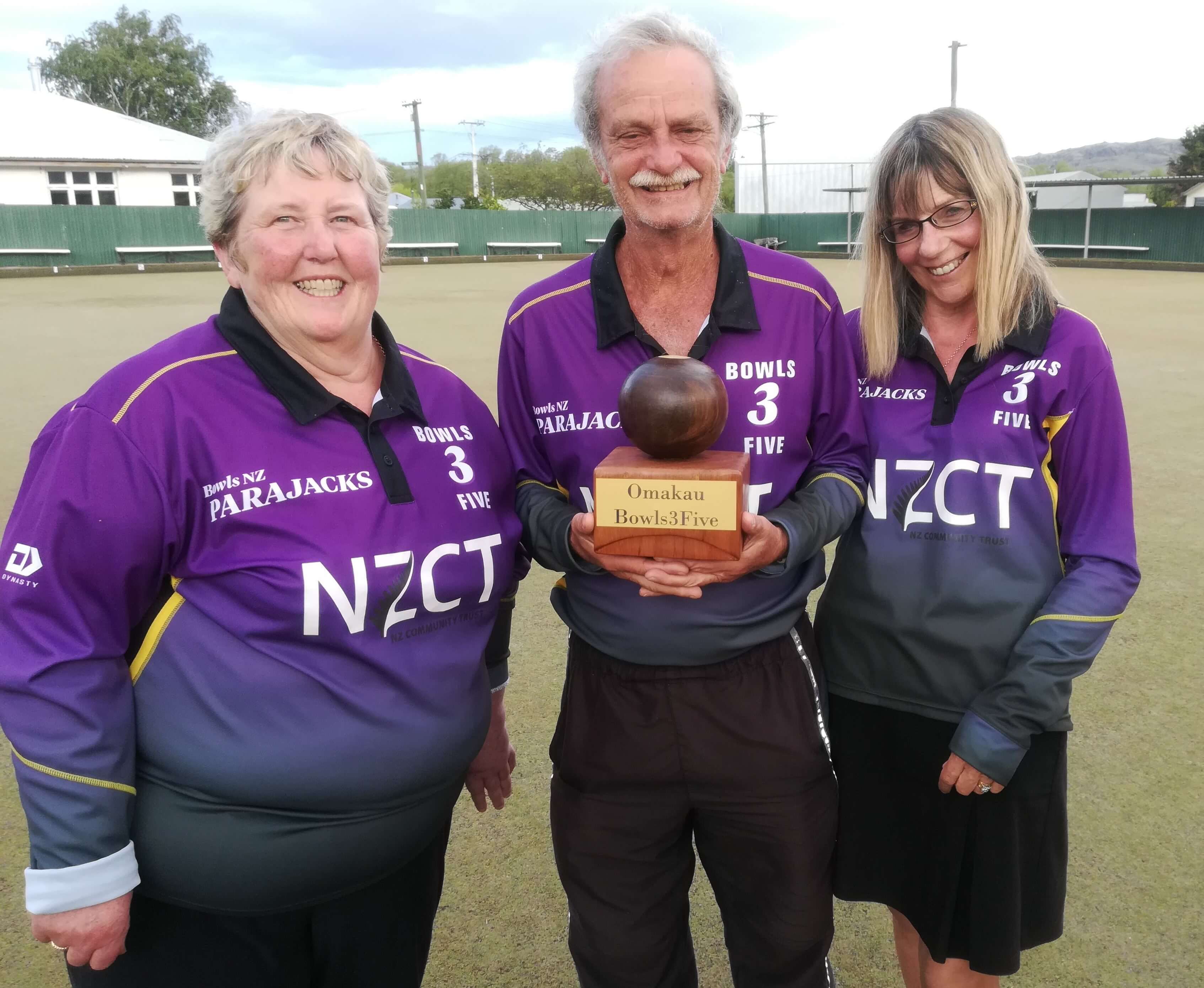 The Parajacks of Skellern, Carolyn Crawford (Dunedin) and local Omakau player Pam Walker headed off a competitive field with a strong finish on the second day in the high-pressure, quick format to take the first prize of $1200.

In a field packed with Otago and Dunedin representatives, the Parajacks won their final two qualifying matches to win five matches out of eight and qualify for the top four.

In the post-section, they lost on a one-end tiebreaker to defending champions, Dion and Pip Liddy and Kyle McGowan (Lake Hawea) after the sets were squared. But the Parajacks then set the pace.

They beat Trevor Drake, Lindsey O’Callaghan and Trevor Ludlow 6-4, 5-2 ((Unbowlievables), and then Gerald Geoffrey, Jamie Koppert and Pauline Seaton (Crackerjacks) 6-2, 4-3. The Hawea side lost their second game to the Crackerjacks 4-5, 4-all.

The Parajacks finished with 6 points and 5 sets to Lake Hawea 6 and 3, and Unbowlievables and Crackerjacks both on 3 and 2.

“It’s just nice to keep the Parajack movement up there in bright lights,” said skip Graham Skellern, who is on the Bowls Bay of Plenty executive and a playing member at both Takapuna and Tauranga clubs. “We played as a team and backed each other up. There weren’t too many times when we were in a desperate situation. Pam and Carolyn were strong on the draw.”

Crawford, a member of the St Clair club in Dunedin, has won 28 centre titles and a national pairs title with Anne Muir, as well as the world B8 disabled singles in Wellington in 2015.

Skellern, a North Harbour and former Bay of Plenty representative, has won 15 centre titles and has been a semi-finalist in the national open championships four times.

It was a momentous occasion for Walker. The hard-working secretary of the New Zealand Disabled Bowls Association, she is an organiser and sponsor of the Omakau event.

When a team dropped out this year, she asked if she could organise a Parajack team and the club was right behind her. She not only became the first member of the Omakau club to play in the summer of bowls event, she also became their first winner.