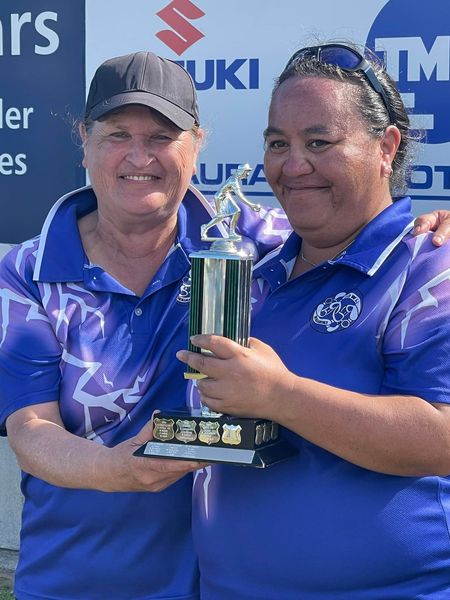 With Mere Eden not available, Merrick – a former centre representative – was a more than adequate replacement. She reckoned she played some of her best bowls in the semi-finals at the Mount Maunganui club, absolutely pounding the kitty.

In that game, Tamehana and Merrick ran away from Keli Alefaio and Bev Corbett, who called it quits early after being behind 0-18.

It was tougher in the quarter-finals when Tamehana and Merrick edged out the Tauranga pair of Angela Stephen and Jocelyn Holten 11-10.

By the time of the final, they were in no mood for another close encounter with a Tauranga combination. Tamehana and Merrick shot out to a 10-0 and though Marilyn Constantine and Mary Campbell made a strong comeback they shook hands after the16 ends at 20-14.

Constantine and Campbell had earlier ended the fine run of Ngongotaha’s Leonie Renata and Julie Kerry in the semi-finals, winning 16-8. The Tauranga combination led 12-8 on the 14th end and Constantine played a fine conversion shot to turn the head from three down to three up – and gain the winning break.

Renata and Kerry upset another strong Tauranga pair of Sue Hodges and Caitlin Thomson 17-12 in the quarter-finals, while Constantine and Campbell beat clubmates June Smith and Donna Whitten 15-9 in the same round.

The Tauranga club was to the fore in the men’s open pairs, as well. John O’Shea and Lane Tasker will be gunning for their second title in three seasons after reaching the final against Tauranga clubmate Cliff Webber and Mount Maunganui’s Nathan Arlidge.

It’s a match full of promise. Webber has the opportunity of capturing his second centre title of the season after winning the open singles – to add to his open triples in 2018 and2019.

Arlidge, a very consistent and accurate lead, has almost become a specialist pairs player, winning the open titles in 2018 and 2019 and the champion of champions last season.

The two combinations made reasonably easy work of their quarter-final and semi-final matches.

Earlier, the husband and wife combination of Andy and Mary Campbell completed a victorious New Zealand Masters tournament in the North Harbour Centre by winning the 60-74years Mixed Pairs.

They came up against fellow Bay of Plenty player Mina Paul and Takapuna’s Derek Brien and won the final 13-4.

The Campbells blew away National Gold Star holder Petar Sain and his partner Jill Fraser(Carlton-Cornwall) 15-1 in the semi-finals, and in the post-section play had another fine win over St Heliers' Richard Kempthorne 15-12.