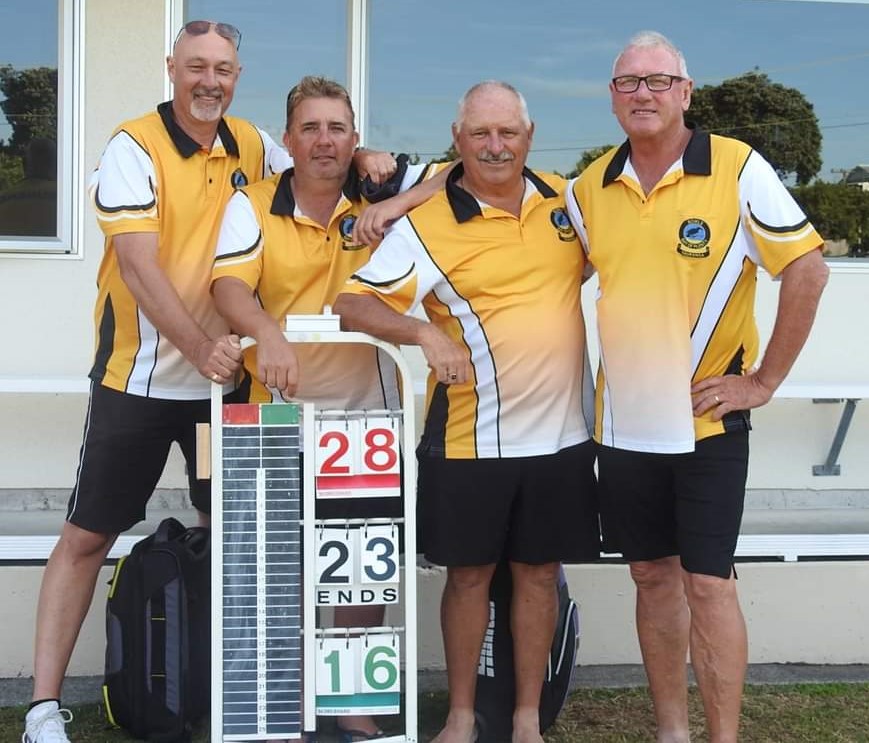 Dan Dickison, John O'Shea, Lance Tasker and Steve Hughes brought the Taranaki men's fours title back to Tauranga for the first time in a decade.
go back

Meet the kings of the 25- end fours game

In bowls where anything can happen and the underdog can beat the favourite, the Tauranga quartet maintained impressive consistency over seven days of the prestigious tournament which attracted 166 entries, making it the biggest fours event in the country.

Their closest games were in qualifying - 25-21 over Bayview's Joe Johanson and 23-16 against Waitara's Jim Niwa - but in the end it was pretty plain sailing.

The Dickison-skipped team opened up the post-section play with a 28-9 victory over the family combination of Gerry, Danny and Bernard O'Sullivan and Steve Sabine (Inglewood). In the last 16 the Tauranga side overpowered national champion Dean Elgar's West End team of John Garrud, Steve Templeton and Neil Candy 29-13.

Dickison, Hughes, O'Shea and Tasker - now playing as a formidable team backing each other up - never eased up. They beat David Nightingale (Glendowie) 29-16 in the quarter-finals and another family combo of Mark, Grant and Brendan Anderson and Phil Kuklinski (Tower) 29-7 in the semi-finals 29-7.

And so to the final. The script wasn't going to plan when Dickison's boys dropped a five on the fifth end to trail 4-9 against Wellington's Ray Martin, Grant Wakefield, Rod Leitch and Mike Carroll. They were behind 9-16 after 13 ends when they went for afternoon tea.

What was in the tea, we'll never know. But Dickison, Hughes, O'Shea and Tasker came back on the green re-energised and stormed to the front by winning the next 10 ends - with three fours and seven singles - to win 28-16. Another runaway win.

Dickison, in outstanding form, broke the hearts and backs of the nonplussed Wellington team. Twice in the second half of the game, Tauranga was down five shots - and  Dickison saved the first by drawing the counter with his final bowl, and then on the second occasion delivered a forehand drive to kill the end.

After a long week, play became scrappy towards the end of the final in the gusty conditions but the victorious Tauranga team always had the handier bowls.

The last Tauranga team to win the Taranaki fours was Iain Dalton, John Bush, Merv Gibbons and Tom Fisher in 2010 - then representing the Tauranga South club.